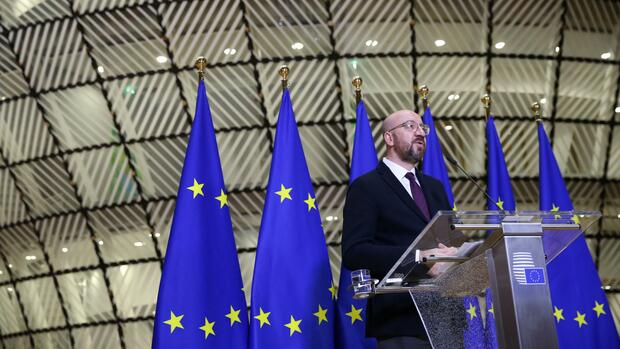 Professional for a few weeks at PSG, Jonathan Mutombo (17) should be loaned to Vitória Guimarães (currently 7th in D1 Portugal). The central...
Read more

It is therefore still unclear what role the ESM euro rescue fund should play in the crisis. There have been fierce discussions on the subject, said Prime Minister Mark Rutte. In the end, they only agreed on “the lowest common denominator – more was not possible on the subject”.

Finance ministers agreed on Tuesday to use the ESM when countries in need asked for help. The instrument of so-called extended credit lines (ECCL) could be used for this and allow loans amounting to two percent of the respective gross domestic product.

The heads of state and government were also unable to resolve the remaining dispute over the conditions for ESM loans. According to Rutte, a group of countries like the Netherlands had insisted on tying the loans to the strict financial and economic policy guidelines that were agreed for the ESM in the euro crisis. But Italy, for example, strictly rejects this – after all, the corona crisis came through the country through no fault of its own.

The final declaration of the summit only says that one recognizes the progress in the Eurogroup. It acknowledges that “the crisis is exceptional and requires a strong response,” said EU Council President Charles Michel.

However, the statement does not speak of more far-reaching proposals such as joint bonds in response to the economic crisis. France, Spain, Italy and six other countries, prior to the summit, wrote a letter to summit host Michel calling for joint debt instruments to secure stable long-term funding to fight the damage caused by the pandemic.

However, many other EU countries strictly reject such corona bonds. This also includes the federal government. Chancellor Angela Merkel said the ESM was the right tool: “I believe that with the ESM we have a crisis instrument that opens up many opportunities that do not call into question the basic principles of our joint and responsible trade.”

The video conference dragged on much longer than expected. Italy’s Prime Minister Giuseppe Conte opposed the previously negotiated final declaration and called for “really innovative and appropriate financial instruments” to deal with the economic consequences of the corona crisis. The five presidents of the EU institutions should submit a joint proposal within ten days.

According to Italian government officials, Conte was supported by Spain’s Prime Minister Pedro Sánchez. So far, both countries have been hardest hit by the corona epidemic.

Michel tried to settle the conflict. Finally, the summit should actually send a signal of EU unity. In the past few weeks, a number of unilateral efforts have caused bad blood among the member states.

Companies should be protected from takeovers

The Europeans have now got better on these issues, and the Commission has done a lot of persuasion. In the final declaration of the summit, the heads of government assure that “rapid border clearance of people and goods will be guaranteed”. They also want to work closely together when providing protective masks or respirators.

However, there is still much need for discussion regarding the common answer to the looming economic crisis. The heads of government therefore limited themselves to praising the European Central Bank’s (ECB) new emergency bond purchase program and the European Investment Bank’s billion dollar aid for small and medium-sized companies.

They also declare that they want to take “all necessary measures” to protect their strategically important companies from takeovers in the crisis. The EU Commission had previously asked all member states to set up control mechanisms to check foreign investments in sensitive sectors such as health or security of supply. In its rescue package, the federal government has already created the possibility of nationalizing threatened companies if necessary.

The heads of government also want to discuss ways out of the crisis soon. A “coordinated exit strategy” is needed to be able to return to the normal functioning of the companies after the pandemic has subsided. Von der Leyen and Michel are now to work out a roadmap together with the ECB – and at the same time accompany the ecological and digital change.

What was important before the corona crisis should still be afterwards.

Share
Facebook
Twitter
Pinterest
WhatsApp
Previous articleIraq: three French hostages and one Iraqi released
Next articleItaly and Spain stand for lack of solidarity within the EU (Júlia Manresa Nogueras)
Save 60.0% on select products from SAMMIX with promo code 6018YMV7, through 4/25 while supplies last.

Rome, 16 July 2020 - The epidemiological curve of Coronavirus in Italy. According to the data...
Read more
News

In Tunisia, a blogger sentenced for a pastiche from the Koran

Emna Chargui was sentenced on July 14 to six months in prison for having published on her Facebook page a text on the Covid-19...
Read more

Professional for a few weeks at PSG, Jonathan Mutombo (17) should be loaned to Vitória Guimarães (currently 7th in D1 Portugal). The central...
Read more
News

Rome, 16 July 2020 - The epidemiological curve of Coronavirus in Italy. According to the data...
Read more