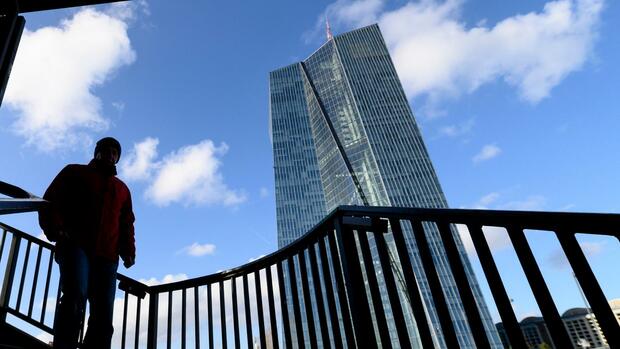 Frankfurt The Federal Constitutional Court’s ruling on the ECB’s bond purchases has caused waves not only in public. Since the judges in Karlsruhe declared the purchases on Tuesday last week partially unconstitutional, opponents and supporters have been arguing violently. The decision also apparently led to stronger reactions on the markets than was initially indicated in the prices.

ECB figures show that the central bank intervened in the bond market more strongly than ever before in the past week. Accordingly, she bought government bonds and other securities for around 45 billion euros. The new purchase program in the corona pandemic called PEPP alone accounted for 34 billion euros of this.

Economists now have doubts as to whether the total volume of purchases decided so far is not set too low by the end of the year. The ECB may have to expand the scope soon – even if that could provoke the judges.

The ECB had adopted PEPP in March; it provides for additional purchases totaling EUR 750 billion. In addition, through its regular program (PSPP), it buys additional bonds for EUR 20 billion a month and has also decided to schedule additional purchases of EUR 120 billion. Despite the huge volume, the framework for the PEPP program would soon be exhausted if the ECB continued to buy as strongly as before.

With its activities on the market, the central bank ensures that the risk premiums for weaker countries with a major pandemic impact, such as Italy, do not skyrocket. In doing so, it holds the monetary union together during the crisis. However, it can only fulfill this role as long as it has enough scope.

Frederik Ducrozet, strategist at Swiss wealth manager Pictet, attributes the increase in purchases to the fact that the ruling raised concerns about the ECB’s ability to act and, above all, increased pressure on risk premiums on Italian government bonds.

“The figures suggest that risk premiums for Italian bonds would have increased significantly more without the support of the ECB.” He believes that the central bank will have to increase the planned volume of its purchase program by around EUR 500 billion.

However, the timing of the decision after the Karlsruhe judgment is even more difficult to predict, says Ducrozet. “If the ECB postpones the decision, there is a risk that fluctuations in the financial markets will force it to expand even further later this year.”

Carsten Brzeski, chief economist at the major Dutch bank ING in Germany, comments similarly: “Even before the Karlsruhe ruling, it was clear that the ECB’s purchase programs only last until late summer or autumn. In monetary policy, it actually has to act in June. ”

The question now is whether the central bank is waiting longer for political reasons. But that is risky. Because the less scope she has, the more worries that would create in the markets – and the more she would ultimately have to do to get this under control. “If the ECB waits until September, it will be very tight for them.”

Another factor that could make the ECB hesitate is the political mix. From the perspective of many central bankers, politicians at European level must do more to combat the crisis. For example, through a joint fiscal program.

Recently, however, there has been little progress. The fear is that the more the ECB itself does against the crisis, the less the pressure on politicians to act will be.

A judge’s decision with many question marks

In their judgment last Tuesday, the Karlsruhe judges ruled that the Governing Council should show that the central bank’s previous bond purchases had been proportionate. Otherwise, after a transition period of no more than three months, the Bundesbank may no longer participate in purchases made by the ECB and the national central banks of the euro countries.

Many questions are still open. For example, the form in which the proportionality check takes place. Another point is whether the ECB or the Bundesbank does this. In the ECB, many representatives want to avoid the impression that national courts have guidelines.

They see the danger that courts in other member states would otherwise do the same and, for example, may request such an examination if the central bank wants to raise interest rates in the future. It is also foreseeable that there will be new complaints against the ECB’s purchase programs after the three-month period. It is uncertain how long new procedures will take.

Until all of these issues are resolved, an expansion of ECB bond purchases could act as a provocation. On the other hand, the uncertainty is likely to continue for longer. Even if the ECB is still waiting, it is uncertain whether there will be more clarity.

However, many experts consider a significant expansion of the purchase program necessary. “The ECB should rather pad rather than spill,” says Brzeski. “It has to give investors a clear signal that it is not worth speculating on rising risk premiums for countries like Italy.” The ING economist expects the new purchase program (PEPP) to double by another 750 billion euros. This could lead to a further conflict with the Karlsruhe ruling. The judges found in their ruling that the purchases made so far do not violate the ban on monetary government financing. However, they emphasized principles such as tying purchases to the ECB’s capital key and the limit that they must not buy more than a third of a country’s outstanding bonds.

With its new purchase program in the corona crisis, the ECB had signaled flexibility to deviate from these principles. Although the new purchases were not part of the process, the decision raises doubts as to whether they are legally possible from the Constitutional Court’s perspective.

And even with the regular PSPP purchase program, the ECB has recently deviated more from its own rules, as Commerzbank analyst Michael Leister observes: “The ECB is moving further away from the capital key in favor of Italy and Germany.”

This could further fuel the conflict with critics of ECB bond purchases. “Of course, the unprecedented deviations of the PSPP from the capital key in the past two months seem delicate in the context of the judgment of the Federal Constitutional Court,” says the Coba analyst.

So far, the ECB has deviated only marginally, if at all, from the capital key, which is composed of the shares of the national central banks in the ECB and thus indirectly of the size of the economies of the euro countries.

But whenever the central bank deviated from the capital key, it corrected imbalances a few months later by buying a disproportionately large number of German government bonds.

In March and April, however, the Commerzbank’s ECB invested six billion euros more in Italian government bonds and almost seven billion less in federal bonds than the PSPP’s own regulations actually provide.

For Leister, these massive deviations from the capital key are an indication of how strongly the central bank is fighting the centrifugal forces that could break the euro apart – and how little it can do.

Leister assumes that the central bank will buy significantly more Italian interest rate papers as part of the PEPP. Against this background, he describes the recent rise in risk premiums for Italian government bonds versus federal bonds as “sobering”.

“When the economy starts up again, there is actually a lot to be said for the ECB to step up its older purchase program (PSPP), which has stronger limits. Because of the Karlsruhe ruling, this route is now blocked, although the new purchase program is probably even more susceptible to future lawsuits. ”Proceedings against the PEPP program would take longer because it would have to be restarted.

Christian Kopf, head of bond markets at Union Investment, even thinks it is possible that the ECB will merge its existing purchase programs and continue them under a new purchase program under a different name.

This suggests that the PEPP could soon reach its limits given the massive bond purchases in recent weeks. An early end to the corona pandemic is also not yet in sight. This solution would have a decisive advantage: the Bundesbank’s PSPP purchases stopped.

“The Karlsruhe ruling would be ineffective, and the European Commission could not start infringement proceedings against Germany,” Kopf explains. The critics of the ECB’s loose monetary policy would first have to initiate new proceedings against the new bond purchase program in Karlsruhe.

Such a re-labeling of bond purchases would, however, be a barely concealed attempt to circumvent the objective of the Karlsruhe judgment. Such a procedure is therefore unlikely in central bank circles. After all, it would be viewed as an affront by the constitutional court and ECB critics in Germany.

The ECB is in a quandary: it must avoid the impression of reacting to the Karlsruhe ruling, since only the European Court of Justice can impose rules on the central bank. At the same time, a confrontation course with Karlsruhe harbors new legal uncertainties. However, the middle ground could restrict the ECB in its fight against the economic effects of the corona pandemic and for the preservation of the euro.

More: The ECJ sees the EU legal system endangered by the Karlsruhe ruling.

After the Wirecard scandal, the wind of change is blowing through the testing industry. Picture: Frank Röth The Wirecard case has brought auditors into the...
Read more
Business

According to the head of the drugstore chain dm, Christoph Werner, the image of the shopping streets in Germany will change permanently.Politicians have made...
Read more
Business

It was in December of the previous year that the doors of Just Wellness hair removal salons suddenly closed. After weeks of uncertainty...
Read more