How the federal government wants to save companies 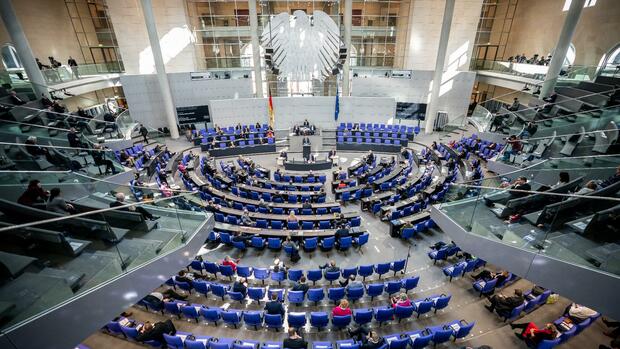 David De Gea Had an early nervousness and was well beaten by Trezeguet's shot which cut the outside of the post. ...
Read more

Berlin It was an unusual Bundestag session on Wednesday morning. Only every third chair was allowed to be occupied by parliamentarians. The spaces in between had to remain free. President of the Bundestag Wolfgang Schäuble (CDU) asked the MPs to keep the necessary distance of 1.50 meters in the corona crisis in order not to infect anyone. “If there is not enough space in the hall, we have also created space in the visitors’ gallery.”

As many MPs as possible had traveled to Berlin for the meeting to ensure that the chancellor majority needed to adopt the crisis measures. However, the Bundestag stipulated for the future to be quorate even if only a quarter of the members are still present. “Parliamentary democracy will not be overridden,” said Schäuble. Parliament remains able to act.

It immediately demonstrated its ability to act. In the afternoon, the Bundestag hastily passed the billion dollar rescue packages for the economy. The Federal Council still has to agree on Friday.

“Hard weeks are ahead of us. We can cope with them if we show solidarity, ”Vice Chancellor Olaf Scholz (SPD) had previously advertised for the aid packages. Scholz spoke on behalf of Chancellor Angela Merkel, who is still in quarantine at home.

The measures would result in a supplementary budget of 156 billion euros – “a gigantic sum,” said Scholz. But they are necessary to deal with the consequences of the crisis. In total, including guarantees and discounted KfW loans, it is even about aid measures with a volume of 1.2 trillion euros.

Despite this huge sum, artisans, retailers and restaurateurs fear falling through the grate. There is emergency aid for small businesses with up to ten employees, and for large companies there is a new rescue fund (WSF), which also grants direct grants as a supplement to KfW liquidity aids – if the companies have at least 249 employees, 43 million euros in total assets and 50 million euros in sales.

Employer President Ingo Kramer praised the decisions: “What has now been launched is a huge and very targeted aid package,” he told the Handelsblatt.

The rescue package must also be accessible to companies, the associations of hotels, restaurants and caterers, Dehoga and IHA, the retail association HDE and the handicraft association ZDH demanded.

Fear of overwhelming the rescue package

“Many medium-sized companies with more than ten employees are at risk of falling through the network of federal support measures,” feared craft president Hans Peter Wollseifer. These companies also needed emergency aid, for example when pending wages or subsidizing rents.
Finance minister Scholz promised in the Bundestag that the government would do everything to mitigate the corona consequences. “There is no script for this.” If necessary, the government will decide on further measures. In concrete terms, Scholz already promised employers that he would have examinations made to make tax-free wages that they want to pay their employees in the crisis. That was what medium-sized companies had asked for.

In the Bundestag, however, other criticisms were initially in focus on Wednesday. A number of MPs were upset with the federal government. Around 15,000 companies are said to be able to slip under the rescue fund.

Union economic leaders fear that this large number could overwhelm the bailout fund – and lead to arbitrary decisions. Therefore, they particularly urged changes to the possibility of the rescue fund to nationalize companies in need. They demanded that the hurdles be raised so that the instrument could not be used indiscriminately.

However, the Ministry of Finance rejected all proposed changes. At 0.08 a.m. Tuesday night the house sent a large package with numerous changes to the law. “That is not possible, not even in these times,” said a CDU MP. “How are we supposed to go through the paperwork until the next morning’s resolution when we get it at midnight?”

Lambrecht for nationalization if necessary

The Federal Ministry of Finance is against criticism. “We have taken up many requests for changes, such as the desire of the federal states to put federal and state programs legally on an equal footing, or to include start-ups in the rescue package,” said the Ministry of Finance. However, one cannot take all wishes into account. And time is short.

“In the crisis, it is imperative that we protect our country’s economic structure and prevent major companies from being sold out or broken up,” said Lambrecht. “The state is ready to partially or wholly participate in companies if this should become necessary.”

However, the Bundestag was able to implement changes elsewhere. For example, companies that use state aid should not be allowed to pay dividends, bonuses or share packages to their top managers. The housekeepers are learning lessons from the financial crisis. At that time, board members of the real estate bank HRE had approved millions of bonuses despite the state’s rescue.

In addition, the Bundestag demands that the state sell shares in companies “at the latest after ten years”, “unless there are urgent economic reasons or reasons that are important for the German economy”, as it was stated in a bill.

“Against this background, the bonus lock for board members makes sense,” said one MP. “This is the biggest incentive for companies to get out of state participation as quickly as possible.” The Bundestag also assures itself of a say. Rescue measures of over 500 million euros are to be discussed in the Budget Committee.

Another new feature is that start-ups can slip under the protective shield. Up until shortly before the Bundestag session, the details were discussed. The result: All young companies are entitled to help, provided they are systemically relevant and can demonstrate goodwill of at least 50 million euros.

After the accelerated legislation, it is now a matter of making many rescue measures known. The statutory health insurance company points out a particularly important point in a circular: Companies in need can have the contributions for pension, health and unemployment insurance due for the months of March to May be deferred so as not to run into liquidity problems.

The employer does not have to provide any security for this, and no deferral interest or late payment is charged. However, the deferral option only applies if other government aid does not work. For example, the expansion of short-time working stipulates that companies are fully reimbursed by the state for the social contributions for the hours lost.

More: What the Bundestag has decided in detail.

Content of the article continuedAs one commentator put it, the hangover from COVID-19 debt in Canada promises to be the "mother of all migraines"....
Read more
Business

Back on the grid ?: Associations call for reactivation of closed rail lines

Brunsbüttel has around 12,500 inhabitants in the west of Schleswig-Holstein. The port city on the Elbe is an important industrial location, especially for...
Read more
Business

11 Jul 2020THEVER THE over the past few years, countless predictions have been made that the global tech industry will suffer a painful breakdown...
Read more

David De Gea Had an early nervousness and was well beaten by Trezeguet's shot which cut the outside of the post. ...
Read more
World

Michael Cohen, former President Donald Trump's personal attorney, was sent back to jail Thursday after being told he couldn't write a book explaining while...
Read more