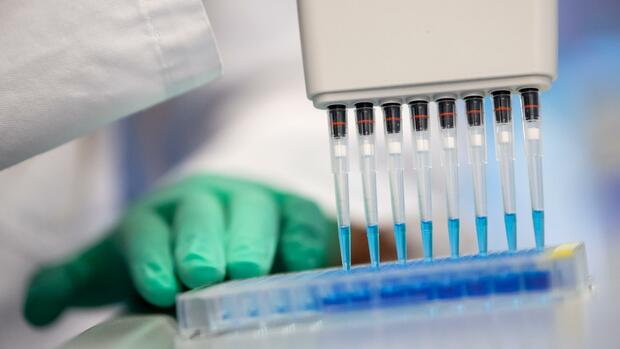 Experts have urged the government to go beyond a recently announced campaign to tell people in England how to wear face covers and promote...
Read more
News

Frankfurt, Dusseldorf Probably never in its history has the pharmaceutical industry focused on a new disease so quickly and intensely as in the case of the coronavirus pandemic. Since the end of February alone, the number of Covid 19 studies listed on one of the world’s largest databases, clinicaltrials.gov, has increased sixfold to around 340.

The World Health Organization (WHO) lists more than 600 studies in its database, including a good five dozen vaccine projects alone. All in all, the pharma intelligence division of the British information group Informa is investigating around 140 different active substances for their potential in the fight against Covid-19.

Practically all established pharmaceutical manufacturers and countless biotech companies as well as academic research institutes are now working in one form or another on therapies for the lung disease caused by Covid-19.

Regardless of the number of studies and projects, the following still applies: An effective cure for Covid-19 has yet to be found.

Resounding success and hard clinical data are still in short supply. And this also applies to those drugs that have recently caused a sensation and raised hopes – including, in particular, the malaria drug chloroquine (brand name Resochin), once developed by Bayer, and the hydroxychloroquine derived from it, the Japanese flu agent favipiravir (Avigan), the AIDS agent Kaletra from Abbvie and the active ingredient Remdesivir developed by the US biotech group Gilead.

Too small and too poorly structured

These substances showed positive signals when tested in Chinese clinics. However, the studies are almost always considered too small and too poorly structured to be able to derive really meaningful results.

Interest is now directed primarily towards several, significantly larger international test series that started at the end of March and are expected to include thousands of patients each.

These include in particular the Solidarity study initiated by the WHO and the Discovery study coordinated by the French research institute Inserm. Both study programs test the drugs chloroquine / hydroxychloroquine, remdesivir, Kaletra and the multiple sclerotic agent beta-interferon with each other and in comparison to standard treatment.

Experts expect that the first results from these studies could be available towards the end of April and then provide more valid statements with regard to promising treatment strategies.

There are two main challenges for antiviral therapies: On the one hand, previous experience suggests that such active ingredients should be used as early as possible during the disease in order to slow the spread of the coronavirus. In this phase, however, almost all infected people show only mild symptoms and it is hardly recognizable who is expected to have severe illnesses.

In addition, there is the problem that the antiviral agents are sometimes associated with considerable side effects and are therefore only of limited use, particularly in the particularly vulnerable older patients.

None of these existing drugs have been developed specifically for the coronavirus. The approvals refer rather to diseases such as AIDS, influenza, malaria, or Ebola. Outside of regular studies, they can therefore only be used in cases of hardship as part of an “off label” prescription, i.e. without official approval for this therapeutic area.

Many doctors are still skeptical about the weak data. “Overall, there is very little reliable evidence regarding effectiveness,” says Wolf-Dieter Ludwig, chairman of the drug commission of the German medical profession.

Ludwig warns against calling one of these medicines a miracle cure in the fight against corona. In principle, they should only be used in clinical studies or exceptionally in cases of hardship.

Such concerns do not prevent patients, clinics and politicians from pushing the use of the funds. For example, US President Donald Trump repeatedly recommended the use of chloroquine and hydroxychloroquine in critically ill Covid 19 patients due to a lack of alternatives. Around 20 US states have now ordered the two active ingredients to be stored.

In Germany, the Federal Ministry of Health initiated the central procurement of both chloroquine-containing medicinal products and the active substances Kaletra, Avigan and Foipan (Camostat). If necessary, these funds should be made available to the clinics for individual healing experiments.

In the meantime, several manufacturers have ramped up the production of chloroquine and have announced extensive deliveries, such as Bayer, for example, Novartis and the generics manufacturers Teva and Mylan.

Gilead has announced that it will produce enough active ingredients for its 500,000 treatments and its one million patients by the end of the year from its anti-virus drug Remdesivir, which has not yet been approved, although no approval has yet been obtained.

The European Commission has downgraded its activity forecast for the year due to a “ economic impact of the containment more serious than what...
Read more
Business

The blue dollar today: how much is it trading this Tuesday, July 7

However, the parallel ticket remained unchanged on Monday and He also continued that trend this Tuesday. "The new offer is good news for...
Read more
Business

The test results confirmed what Jair Bolsonaro suspected. The Brazilian president announced on Tuesday that he had tested positive for Covid-19, a disease...
Read more

Experts have urged the government to go beyond a recently announced campaign to tell people in England how to wear face covers and promote...
Read more
News

Experts have urged the government to go beyond a recently announced campaign to tell people in England how to wear face covers and promote...
Read more